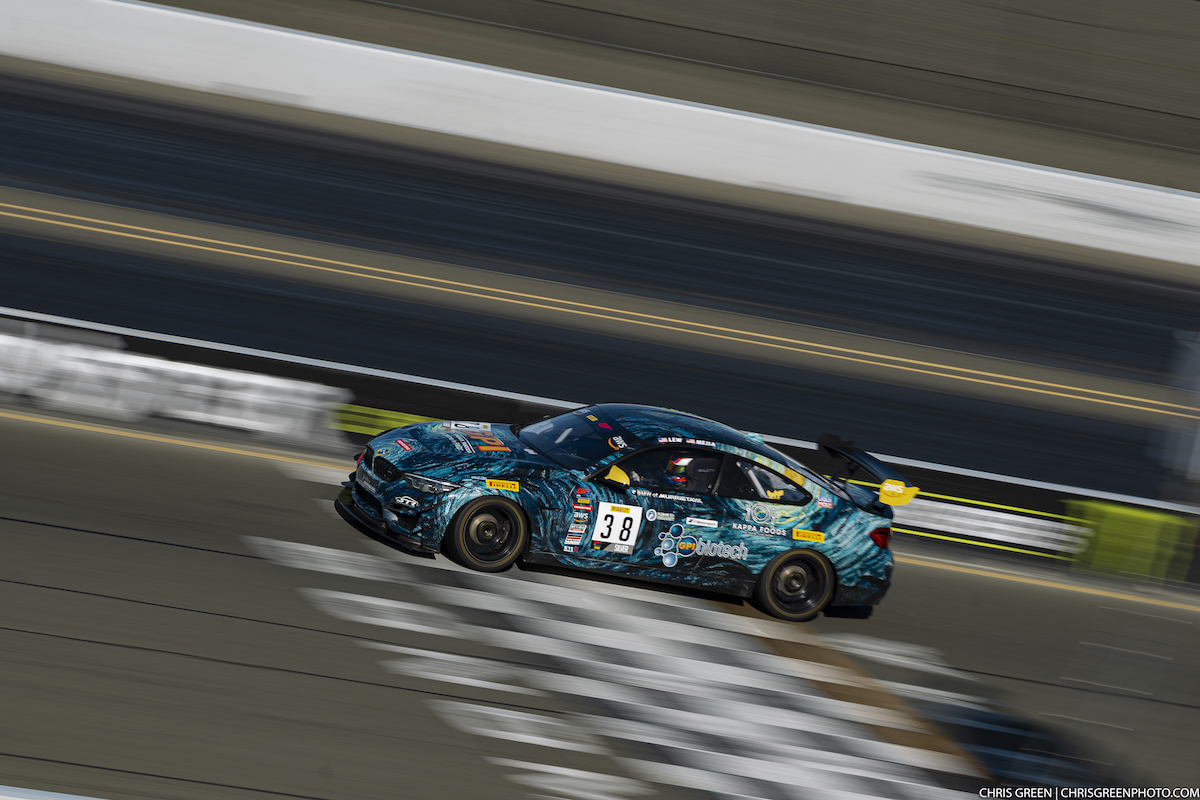 On their maiden GT4 America Series weekend as teammates, California natives Tomas Mejia and Bryson Lew, the youngest duo ever to compete in the series, made a strong start with the fifth quickest time in first qualifying around the Sonoma International Raceway, courtesy of a 1m 47.950s for Tomas. Later that afternoon, Bryson likewise netted the sixth fastest time in the Silver class for race two the following morning. The two 17 year-olds regularly lapped within a tenth of each during the course of the weekend.

Battling amongst some of the most experienced GT racers in the world on his competitive debut in the BMW M4 GT4, Tomas more than held his own during the opening stages of race one by running fifth in-class. Similarly strong pace from Bryson after the mandatory pit stop ensured the #38 ST Racing BMW secured a top six finish in the Silver class first time out.

On Saturday morning, Bryson emulated teammate Tomas with another impressive run during his stint, the BMW picking up spots once again on the opening lap. After a rapid pit stop from ST Racing’s experienced mechanics, and with both teenagers dutifully preserving their Pirelli rubber in both races, Tomas ended the weekend on an absolute charge, picking up positions against AM and even PRO-AM cars in the closing stages of race two en-route to a top five in the Silver class.

Despite the enormous learning curve, both Tomas, a multi-time TCA-class winner in TC America last year, and Bryson, a two-time podium finisher on his TC America debut in 2020, were satisfied with a job well done on their opening weekend with ST Racing. 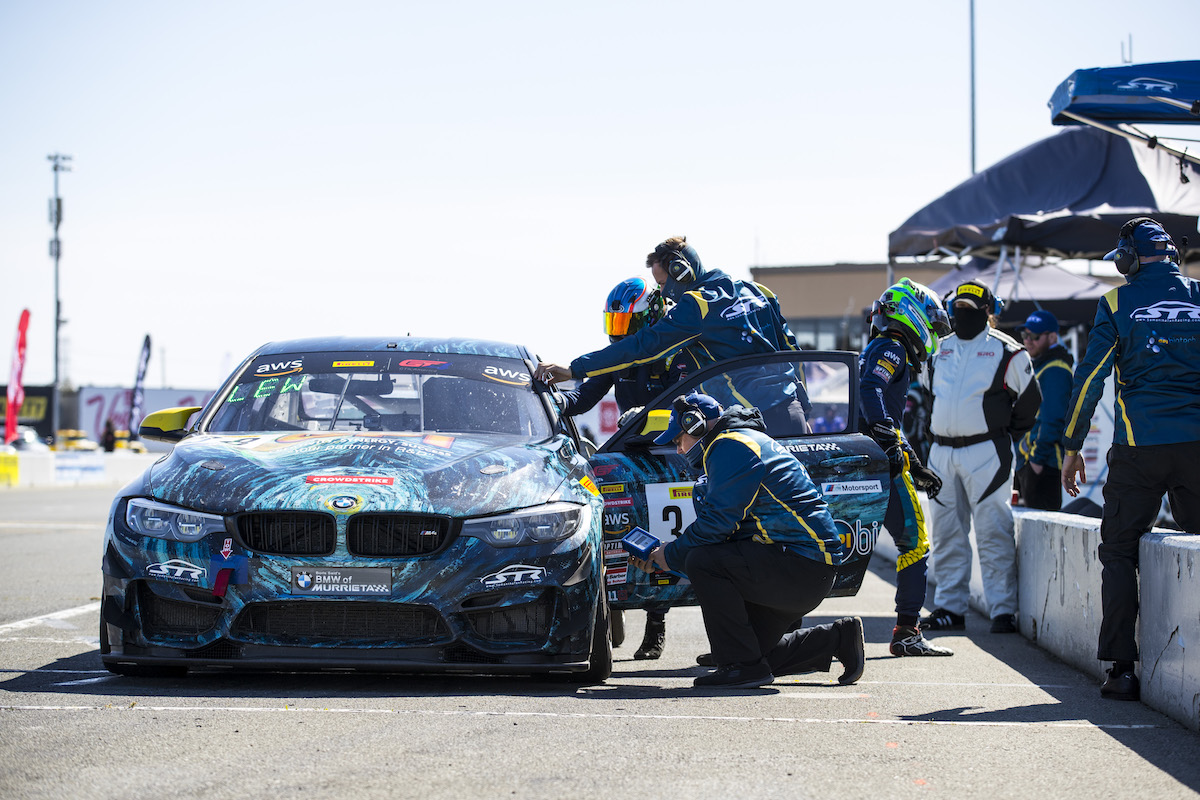 Tomas Mejia (#38, Silver): “Knowing that our car isn’t ideally suited to the Sonoma International Raceway, and that things can only go up from this race onwards, I actually think we performed very well. The goal was never to reach the top step, but instead to secure points. In both races we did just that, and we finished in front of a lot of the other BMWs in a very competitive GT4 field as well. Both Bryson and I have now tested the waters at Sonoma, we now have a greater understanding for the BMW M4 after this weekend that we can build on, and I think we’re ready to show what the car and the team can really do at the next round at COTA.”

Bryson Lew (#38, Silver): “This was a successful debut race weekend, and Tomas and I raced clean and consistent laps all weekend. Admittedly, while learning about the car I made some mistakes in qualifying, but our goal was always to come at full force for our next race at COTA. I want to thank ST Racing for all their hard work this weekend at Sonoma!”

Across in the sister #28 BMW M4 GT4 meanwhile, long-time teammates Ryan Eversley and Joe Rubbo endured a tough season opener at the Sonoma International Raceway. The American pair, who previously raced together in the Ferrari Challenge as driver (Joe) and coach (Ryan), found grip at a premium as they nursed the same set of tyres throughout both qualifying sessions and race one. The pair’s diligent run against insurmountable odds in the hotly contested Pro-Am category was made even harder with two heart-in-the-mouth moments not of their making.

The first came just over 30 minutes into race one. Joe was nearly wiped out as he entered his pit box, race leader BimmerWorld Racing having inadvertently released Nick Galante straight into the path of the #28 BMW M4 GT4. Only razor-sharp reflexes from both Joe and Galante prevented a costly collision.

The second incident meanwhile came on the final lap when Ryan, now at the wheel of the #28 BMW, went wheel-to-wheel with the NolaSport with OGH Porsche at the turn seven hairpin. Two into one however doesn’t go, and light contact was made when the 718 Cayman Clubsport attempted to get over the top of the BMW into turn eight. While the Porsche spun out, Ryan was able to recover and collect the chequered flag in 13th in the Pro-Am class.

The following day, with Ryan now on the opening stint, the #28 ST Racing BMW once again made an impressive start, picking off cars straight off the bat and even running in tandem with the sister #38 M4 GT4. Despite time lost on pit road, brand new rubber for race two meant both Ryan and Joe could push unhampered across the one-hour event, the pair picking up a hard-earned 12th in-class in a highly competitive mid-pack.

Ryan Eversley (#28): “’Tough’ wouldn’t be a good enough description for the weekend but it’s the first word that comes to mind. We knew the BMW would struggle at Sonoma but it was really difficult starting near the back at a track that you can’t pass on. Joe did a great job in his pro debut and I’m very proud of him. The crew also did an awesome job and I’m happy to be racing for Ken and Samantha at ST Racing. Next race is Joe’s home track at COTA and I think we’ll be quite a bit stronger.”

Joe Rubbo (#28): “The results don’t show the improvements we made this weekend. ST Racing made me feel right at home and I really enjoyed working alongside them. This being my first PRO racing weekend, I wanted to be on-pace and learn as much as possible, and I’m confident I achieved that. Ryan’s goal for me is to always improve with each session and I was able to do that, so I’m happy. Our next race will be at COTA, my home track, which I believe will suit the BMW well. I’m really looking forward to racing in the great state of Texas!”

Tomas Mejia, Bryson Lew, Ryan Eversley and Joe Rubbo will be back in action for ST Racing on 30 April to 2 May for round two of the GT4 America Series at the Circuit of the Americas in Austin, Texas.